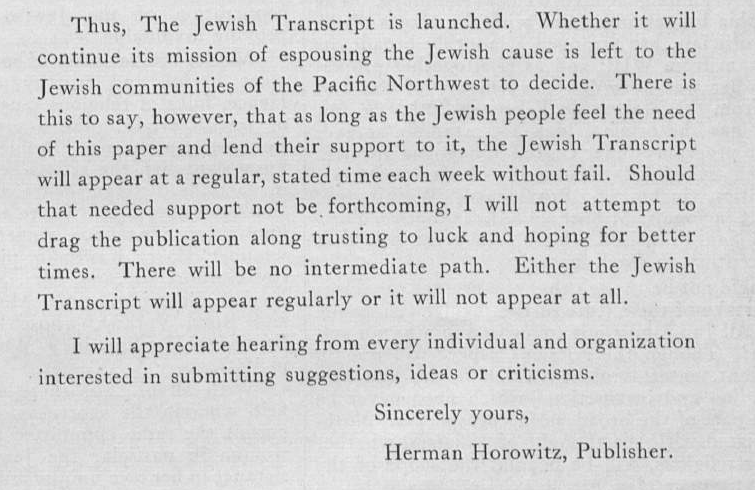 Over the past several years, we have watched as the world has shifted from consuming its news in print to online. At the same time, the Jewish Federation has been questioning whether the best vehicle for community outreach and communications would be through a print newspaper such as JTNews, or if there might be a better way to talk about the great things happening in greater Seattle’s Jewish community and beyond.

As such, on January 22, the board of the Jewish Federation of Greater Seattle approved a proposal to transition JTNews from a print newspaper to a bimonthly glossy magazine that highlights our local Jewish life. Rather than be published by the Federation, though we will still retain ownership, the content will be produced by a magazine company with vast experience both in publishing in our region and taking advantage of a full breadth of print and online resources.

Every donor to the Jewish Federation and every subscriber to JTNews will receive a complimentary subscription to the new magazine. In addition, between issues, the Federation will issue a quarterly newsletter with relevant information about events and community news.

With the release of the demographic study this past month that highlights the incredible growth of our region’s Jewish community, we are very excited about this new opportunity and believe that this new magazine will portray who we are and what we do in a fascinating new way.

JTNews will wind down with its Passover issue at the end of March, and the new magazine will begin publication this coming August. We appreciate the work the staff of JTNews has done over the years, and it’s possible you will see some of their names on the masthead of the next iteration in the life of our Jewish community’s communications vehicle.

President and CEO, The Jewish Federation of Greater Seattle

Board chair, The Jewish Federation of Greater Seattle