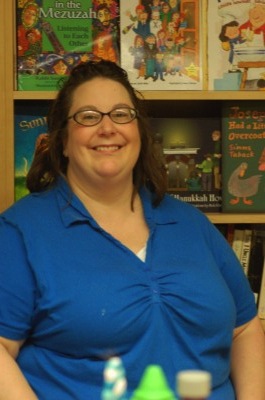 Age: 38
Location: Marysville
Where to find her: jewishinseattle.org
If anyone can point to how the first five years of a child’s life sets the tone for his or her Judaism, that person is Amy Paquette.
“My mother died when I was 5, and my dad died when I was 12. I really had to figure out my teenage years on my own,” Paquette says.
Growing up in Pocatello, Idaho, her grandparents helped to found the tiny temple there, but otherwise “I was thrown very much into a Christian world,” she says. “But I always knew I wanted to come back to being Jewish, and it was because of those first five years.”
Paquette, whose career as a Jewish communal professional has led to her current position as director of community engagement at the Jewish Federation of Greater Seattle, got her start as many in the field do: By serving as a youth adviser. She worked at Temple Beth Or in Everett, where she and her then-fiancÃ© Dan — now her husband and the father of their 6-year-old daughter — became members.
“I felt this would be a great way to know people in the community, so that’s where I fell into working with teens,” she says.
Her day job, however, was working for Catholic Community Services, and it struck her how people working within their religious communities could be so passionate about their work. So she talked to a rabbi she knew, who connected her to the Federation’s education department, and she became principal of the former Community High School of Jewish Studies.
While the school has since wound down, during her tenure Paquette also took on responsibilities for PJ Library, which sends free Jewish books to any young child in the area — a perfect match given her life experience.
Whereas in past years you may have found Paquette at a weekly music and storytime event a couple mornings a week, “the next phase for PJ Library is to get me more behind the desk, planning what’s our future going to look like, and having my educators at Mockingbird [Books],” she says.
In addition, she handles teen programming, such as administering scholarships to send kids to Israel, and brings resources from Israel to the local community.
Paquette was also instrumental, with many of the local youth groups, in creating community-wide programming such as the Tween Extreme that has successfully brought more than a hundred middle schoolers together for Havdallah and programs like scavenger hunts in limousines.
“Unlikely partners came together…and said, “˜Let’s do something fun for the kids!’” she said. “All of us will be responsible, and all of us will have to put in some dollars and some time. No one gets the glory.”
Paquette’s supervisors, however, are happy to give her the glory.
“She is awesome, she is thoughtful, she’s caring, she embodies the whole Jewish experience,” said Nancy Greer, the Federation’s interim CEO.
David Chivo, the Federation’s executive vice president, echoed the sentiments.
“Her enthusiasm for what she does and being connected to Jewish life is truly infectious,” he said. “She is thoughtful, strategic, insightful, and cares so deeply about the future of Jewish community and how she can make use of herself to make an impact.”
Probably more than anyone, Paquette’s seven-plus years of observing and participating in this Jewish community have shown her the gaps and where collaboration like Tween Extreme are necessary to keep it vital. And she feels that given the Federation’s role as Seattle’s central Jewish agency, she’s perfectly placed to work on filling those gaps.
With impending changes in so much of the community’s leadership, including at the Federation, Paquette is curious to see how the dust settles. Regardless, she hopes the rapid change will bring opportunity.
“We’re very lucky here in this area,” she says. “We have a lot of passionate people, and I think that they’re wanting direction and if we can give them that direction we can do some powerful things.”