Please hand me that freshly sharpened stylus. I need to etch this in cuneiform on my clay tablet. When it’s dry, I’ll call the Pony Express to carry it to my editor. Then a typesetter will set my words, one letter at a time, into trays of type and press them onto individual sheets of paper. 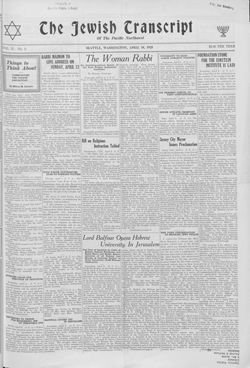 This is how outmoded I felt when I heard that this venerable newspaper, The Jewish Transcript/JTNews/JewishSound, was being terminated by its owner, the Jewish Federation of Greater Seattle.

It’s no secret that newspapers are dying. The local Norwegian community newspaper announced its demise around the same time, although an “angel” has come forward to save it.

While this Jewish paper has tenaciously held onto a readership of about 3,000 households, estimated to be about 12,000 readers, advertisers have fled in droves as Internet advertising has grown. Even with an Internet presence, many publications are still figuring out how to make money in a world dominated by Craigslist and Google.

As the weeks have worn on, I’ve become more sad. I am sad on a personal level to lose my position in the community. But I am also sad for the organizations that serve our community, particularly inclusive ones, such as the Holocaust Center for Humanity, the National Council of Jewish Women, or the Stroum Jewish Community Center, that cut across denominational boundaries. This is the community most affected by the loss of the paper, and I’ve heard this from many. The local paper gives organizations a tool for informing readers about the community at large through articles and advertising. And while it might be on a small scale, it gives organizations a chance to attract new donors and volunteers.

Six months from now, a local Jewish magazine will be launched by the Federation and SagaCity Media. With six issues a year, it will serve a different function, but might be limited in helping organizations publicize events. The lead time for magazine advertising and copy is quite long and events will need to be completely planned months in advance for placement. Organizations will likely be more dependent on their own databases and may spend more money on marketing. Members and leaders of local organizations have told me that the loss of the paper is a loss to their organizations and the community. How will they reach people outside their membership? Can they afford magazine advertising? And how many emails from different organizations are you or I really going to read?

On the other hand, a glossy color magazine will likely appeal to advertisers the newspaper couldn’t attract. Magazines offer staying power that their dowdy great-aunt, still stuck on newsprint, doesn’t have. A magazine sits around your house or waiting room for a lot longer than a newspaper — it’s a fact.

Given the state of the newspaper business, I wasn’t that surprised that the Federation put the 90-year-old Jewish Transcript out of its misery (and I revert back to its historic name to honor its long and respectable history). Yet, as the most overarching organization in the community, what is the Federation’s obligation to its donors and grantees to help keep the community informed?

It’s impossible to look at the loss of the paper in the face of the revelation that there are almost 20,000 more Jews in our state than there were 15 years ago, whether that factored into the decision or not. I think most of us in the organized and affiliated Jewish community are wondering how to reach those folks, most of whom are not Jewishly active. Will a magazine accomplish that better than a newspaper? Possibly, if that is part of its mission.

I’m not naïve. I know that the estimated readership of the newspaper was less than a third of our region’s estimated Jewish population. I know that newspapers are not much read anymore and that most people, young and old, are getting their news from the Internet. But I still see a gap that is created in the ability of local organizations to communicate to the community.

Unhealthy and old? Or a longstanding community tradition put out to pasture before its time? Whichever you choose, it is a death in our family, a heart-wrenching loss to many. We will move forward day to day, as we do, but let’s not forget this vital piece of our community that once lived with us.

May its memory be for a blessing.

Diana Brement was the longtime columnist of The Jewish Sound’s “M.O.T.: Member of the Tribe” feature.